A teen magazine has chosen Jade Stokes as one of its true beauties. For Jade, that means being alert to the world and its needs.

It was after “morning circle” at a workshop he’d organized that John Stokes was approached by a woman expressing her awe of Stokes’ young daughter Jade, who had spoken during the sharing session.

“When I grow up,” the adult woman said, “I want to be just like Jade.”

It wasn’t the first time the founder of The Tracking Project (a nonprofit organization that teaches a reverence for the natural world, native cultures and peacemaking) had heard the sentiment. Stokes says his daughter, whose middle name, Keahi, means fire in Hawaiian, has been an inspiration since her birth 13 years ago.

“She has a radiant inner being that’s infectious,” says Stokes, who home-schools Jade and her two siblings, Kainoa, 8, and India, 5, in Corrales. “I think I was chosen as Jade’s parent to protect and not extinguish the light she has.”

Jade Stokes’ inner beauty is being recognized this month by New Moon: The Magazine for Girls and Their Dreams, which selected her as one of “Twenty-Five Beautiful Girls.”

For six years, the magazine ­­ which accepts no ads and runs no fashion or beauty conscious articles ­­ has countered People magazine’s “Twenty-five Most Beautiful People” by celebrating 25 young girls for who they are and what they do, not how they look. The girls are selected by New Moon’s editorial board, made up of 16 girls, ages 8 to 14.

“The list features 25 girls who are beautiful just for being themselves,” says New Moon’s managing editor, Kate Freeborn. “It’s a wide range of girls from all different walks of life.”
Jade was nominated by “her biggest fan”­­ her dad ­­ who submitted an essay noting his eldest daughter’s independence, strength and self-reliance.

“I like that I’m aware of what’s happening in the world and that I’m smart enough to recognize when something is wrong and want to do something about it,” the composed but passionate teen says. 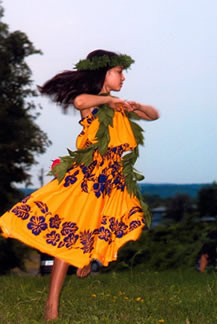 Jade has seen a lot more of that world than most adults. The entire family ­­ including mother Nancy Latuja, a native of the Philippines ­­ regularly takes part in Tracking Project trips to places like Brazil, the Philippines, Hawai’i and Tahiti. Through the journeys, Jade has developed a reverence for wilderness conservation, native dance forms and cultural diversity.

She finds it hard to understand why anyone wouldn’t care about the same subjects. In the third grade, she started a wilderness preservation club. When she was interviewed about the project, the precocious crusader shrugged and said: “I don’t get it. Why don’t people take care of this world? It’s the only one we have.”

Jade has been an integral part of the Dreamtracking camps for girls her family hosts each summer, which give instruction in self-reliance, self-defense and survival skills. She also reads voraciously ­­ author Tamora Pierce’s books about strong, independent girls are her favorites ­­ dances at her mother’s studio in Corrales and aspires to add Latin and French to her familiarity with the Hawaiian and Portuguese languages.

Lest she seem too much a paragon, however, her father hastens to add that Jade is a typical teen, who loves making beaded jewelry, wearing colorful outfits and hanging out with friends at the library.

Her advice to girls would be a strong guideline for anyone.

“Do what you want to do, go where you want to go, just don’t do anything bad to anyone else to get there,” she says.

“It’s an interesting idea, but I don’t want to be it,” she demurs. “What I want to do is carry on my dad’s work, where people wake up and see what’s wrong ­­ and then fix it.”