In a Grain of Sand: A Cross Cultural Odyssey…by Michael Gray

The following is an excerpt used with permission from the as yet unpublished manuscript In a Grain of Sand: A Cross Cultural Odyssey by Michael J. Gray.  Mike was the deputy principal at the Aboriginal Community College (now known as Tauondi) in Adelaide, South Australia when I first began to work there in 1978. He was instrumental in helping me learn to work with Aboriginal people and Aboriginal communities. — John Stokes 2013

In a Grain of Sand: A Cross Cultural Odyssey
Chapter 98: Bringing the Pieces Together
© Michael Gray, May 2009 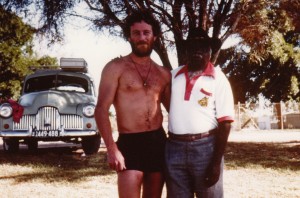 John Stokes with Uncle Jimmy in 1982 on a road trip in South Australia.

John Stokes, who was the American teacher who worked at the College for several years both part-time and full-time around the years I was the deputy principal, was fascinated by Aboriginal culture and the people. He made many friends amongst the students and in the community, and one in particular was named Jimmy James, who was often referred to as ‘the last of the great trackers.’

Jimmy James was a traditional Pitjantjatjara man born around the beginning of the First World War (1914). He was a victim of the brutality and bigotry of those days and was virtually enslaved on a cattle station before he escaped and began working for the South Australian police as a tracker. His feats tracking children lost in the bush as well as murderers, escapees from prison and various other criminals during the next forty years became legendary throughout Australia and were acknowledged with various honours and awards.

None of Jimmy James’ phenomenal skills of observation or his ability to interpret tracks were passed on to other members of his clan relations, nor did the police who worked with him for many years learn more than the basic principles. But he did teach John Stokes some of his art, and that it was more about ‘getting into the mind’ of the person he was tracking, and to deduct from what they were doing, where they were going. It was a matter of bringing all the signs together into a kind of story and once he learnt their story, he knew where he would find them.

The signs were obvious to him. The ability to read the information contained within a single footprint, or the powers of observation behind interpreting a broken twig, were undoubtedly incredible from a European perspective, but they were normal, and virtually instinctive for any person raised in a hunter-gatherer tradition. To the point that when we lived at Yirrkala, young children could tell us whose tracks had just been made where we were walking. I was also told there were adults who knew everyone’s tracks on the mission. All 650 of them!

When John Stokes returned to America in 1981, he worked with another tracker for a while who had been trained by Native Americans in the same art. He then went on to found a non-profit organization in 1986, which he called ‘The Tracking Project.’ Its main purpose was to work with Native American elders and community educators to help re-connect people with the natural world, especially the young. Over the next twenty years, John Stokes and his team developed a series of programmes based around Nature and cultural awareness, involving tracking, survival, music, storytelling, dance, peacemaking and the martial arts.

Today Indigenous people share in these programmes throughout the mainland America as well as in Hawaii, Brazil, the Philippines, Sweden, and Japan. Similar programmes are also available to others from different cultures, including whitefellas. Probably close to 250,000 people by now have participated in the various programmes, with teams of Indigenous instructors in all those countries now providing the foundation programmes, ‘Nurturing the Roots’ and the ‘Arts of Life.’

Kevin ‘Dookie’ O’Loughlin is connected with this group of Indigenous elders through an elders and mentors programme they shared for one month every year for three successive years. ‘The Tracking Project’ paid Dookie’s fares and costs in recognition of his cultural teaching and knowledge. The elder’s programme was yet another part of The Tracking Project’s overall spirit and vision, and which is also embodied in a concept referred to as “Bringing the pieces together again.”

The origins of this vision come from a Native American story that appears underneath the symbol of a turtle on the front page of every edition of The Tracking Project’s newsletter:

…It seems that one time down south, long ago, Coyote ate Turtle. When he did, all the ponds and streams dried up, because Turtle was the keeper of the water. The animals went to Coyote and begged him to bring Turtle back. Coyote thought about this and then brought Turtle back up. But Turtle was all in pieces and the animals had to put him back together again.

! It was not that easy, either. Before he was eaten, Turtle had plates of solid black, white, red or yellow color. But the pieces coughed up by Coyote were so small that they could not be put back together in the same way. So the animals did the best they could, and Turtle became a beautiful mosaic, each plate shining with shards of all the colors.

And it worked. Turtle came back to life, and when he did, the water came back, too.