Greetings to everyone from our high desert home in Corrales, New Mexico, our base for the past 36 years. We chose to cancel the majority of our in-person camps and gatherings for 2021 — as we did in 2020. But we have found that our work in the communities of New Mexico and Native communities around the world has created a global family and network of trained mentors and students who are more interested than ever in our message of Natural and cultural awareness.

Work with the Iroquois Confederacy

This year marks 40 years since I traveled from the Aboriginal Community College (Tauondi, Inc) in Adelaide, South Australia to meet the Mohawk people at Akwesasne and begin to work with the Iroquois Confederacy. The work took many forms—survival camps for the youth, Youth & Elder gatherings, travels and cultural gatherings with Jake Swamp and the Tree of Peace Society, the publication of Thanksgiving Address: Greetings to the Natural World, ten years of camps with a project to design a Mohawk-friendly math and science middle school curriculum — and the list continues
to grow.

Talks with Tom Sakokwenionkwas Porter and others

In August and September, I was invited to take part in a new series of recordings with Tom Sakokwenionkwas Porter, friend and traditional Mohawk Elder. These recordings were organized and hosted by John Charamella, who wanted to see more of Tom’s teachings preserved and shared. I was invited to take part due to my work with the Thanksgiving book over the years. The programs were recorded on Zoom and then posted to YouTube.

Tom has been an important “guiding light” for our Project since the mid- 1980’s when we took part in countless gatherings, especially the Sacred Circle at the Omega Institute which brought non-Natives together with Native elders. In the Iroquois world, everything begins with Ohén:ton Karihwatékwen, also known as the Thanksgiving Address. Ohén:ton Karihwatékwen translates as “the Words we say before we do anything important,” so it was only natural for this to be the topic of the first program in the series.

In the first recording Tom speaks about the origins and importance of the Opening Words. Regarding Native traditions, we often hear the term “Original Instructions.”

When you hear Tom share the origins of these words, you will understand how far back in time we must go to find the source. Here is the link to the first program: https://www.youtube.com/watch?v=Ndne2Euve4U

In this video Tom also discusses an important agreement between the Haudenosaunee and the Dutch, which dates back to the 1600’s known as Gä•sweñta’, or the Two Row Wampum. The Haudenosaunee see this wampum as a living treaty which exists to this day, ensuring that each nation will respect the ways of the other when they meet to discuss solutions.
https://www.onondaganation.org/culture/wampum/two-row-wampum-beltguswenta/

In October we took part in the second recording with Tom, this time speaking about indigenous education, Native language immersion and specifically the Akwesasne Mohawk Freedom School, the first full immersion indigenous K-8 grade school in the United States.

In this talk he is joined by Elvera Konwanahktotha Sargent who managed the Freedom School for years and now manages the Friends of the Freedom School group, as well as Kawennahente Clute, a graduate of the Freedom School, currently a teacher there, and John Stokes. Click on the following YouTube link: Tom Porter (Sakokwenionkwas) and others talk about an indigenous perspective on education.

For more information about the Friends of the Freedom School, visit:
https://www.foafs.org/ Further talks with Tom Porter are planned for the future.

Words Before All Else A film by Jess Lowe Chaverri, Director/ Producer

In the early days of COVID (March 2020) we were approached by a young filmmaker who was moved by the Opening Words and wanted to do a film honoring Nature and the Thanksgiving Address. This was Jess Lowe Chaverri, who we sent on to speak with Tom Porter. After two years and many meetings, Jess is producing her film which she calls Words Before All Else using beautiful imagery together with the words of the Opening in Mohawk as spoken by the students, teachers and community of the Akwesasne Freedom School. The film will be used to help the Freedom School raise funds.

The Tree of Peace

In 1984 and ’85 I worked on the staff of Tom Brown’s Tracking School. John Charamella came through Tom’s school in 1984. Our friendship led to an invitation for Jake Swamp and I to do a workshop for his community in 1985. The success of this gathering led to our return to the Renaissance Community in 1987 for a Tree of Peace ceremony with about 250 community members.

By that time, Jake and I had combined The Tracking Project and the Tree of Peace Society to present a series of gatherings we called Tracking the Roots of Peace. These gatherings of natural and cultural awareness continued until 2003 or so. In that time we ceremonially planted lots of different trees all over the world and advocated for the planting of thousands and millions of trees beyond that! https://thetrackingproject.org/tracking-the-roots-of-peace/
Where possible, we try to follow the growth of the Peace Trees. I asked John to send a picture of how the white pine we had planted in 1987 looks today. Above is the photo.

I have always enjoyed the Chinese saying:
Q. When is the best time to plant a tree?
A. Twenty years ago.

Some of the trees from our early Tracking the Roots of Peace days were planted almost 35 years ago! And the original Tree of Peace was more than 1,000 years ago.

For years, one of the most popular parts of The Tracking Project’s courses had been the daily dream circle. In 2017 I decided to offer a course on dreams and dreaming that honors some of the vast knowledge I have
gained through decades of work with traditional elders and healers from around the world.

Traditional cultures have found an amazing range of styles to express their experiences in the dream world. Using the technique of “dream tracking” we look at the ecology of dreams through the eyes of many varied cultures and
traditions.

We held two of these gatherings in 2021— in April and in October — gathering in a private yurt outside of Santa Fe, NM to examine this fascinating topic.
Come join us in 2022. 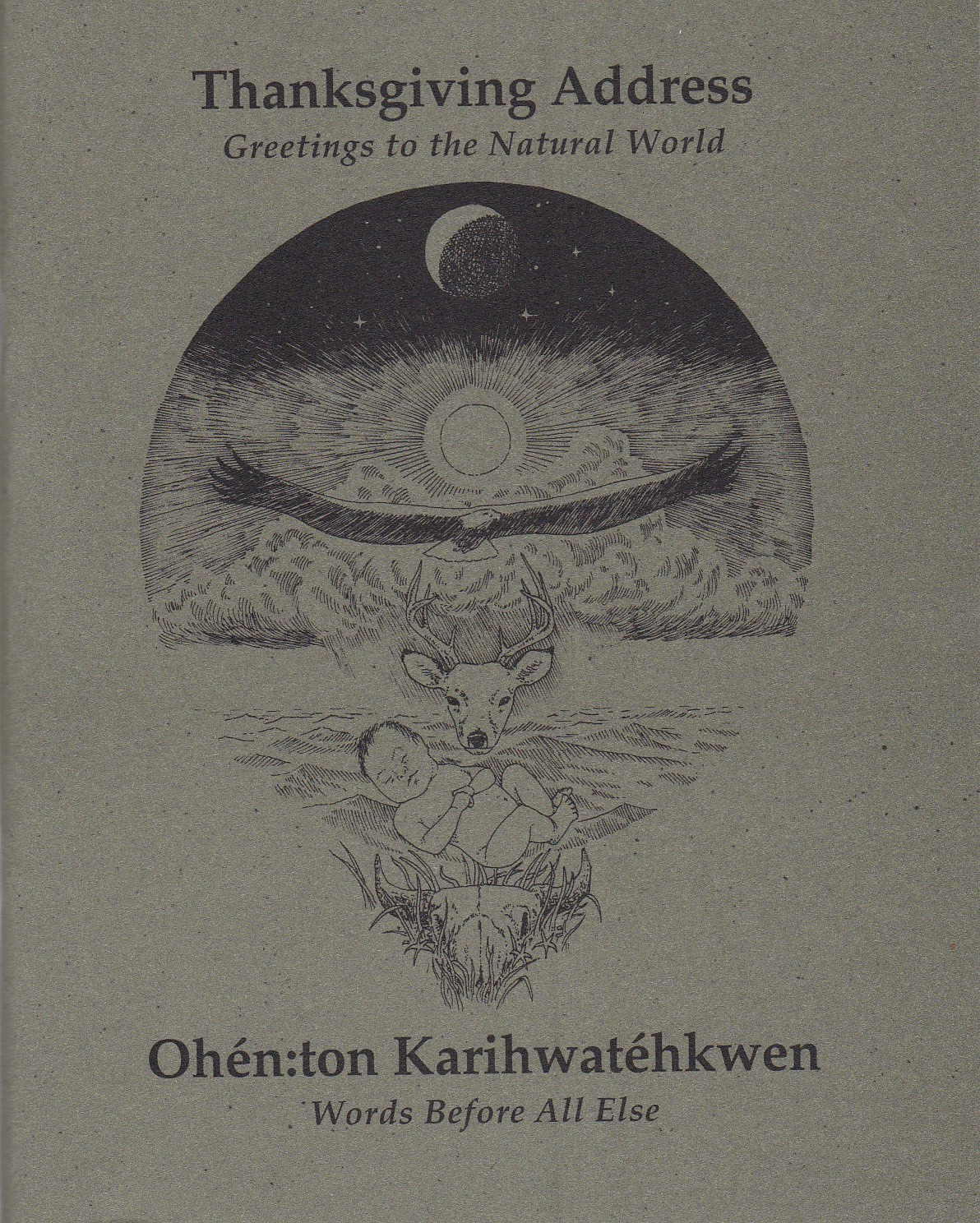 Lisa Bennett Matkin — Tracking Project staff member, mentor and originator of the SHEA Tree Center in Garrison, NY — offered to host a dream circle via Zoom on her site that would meet on a monthly basis. Since June 2020, we have continued to hold these circles which attract attendees from Scotland, Brazil, Hawai’i and all around the mainland US. Dreams, like breath, are common to all and provide each of us with a personal entry point to learning how to track ourselves. Thus, “Dreamtracking.” But better yet, we use the skills of outer tracking to track the wilds within. For more information and registration for future events, visit: https://sheatreecenter.square.site/

In addition to these collaborations with Lisa, we have continued our working
relationship with Gabriel Kram, Founder of Applied Mindfulness, Inc., The Restorative Practices Alliance, and the Academy of Applied Social Medicine. I am on the Governance Council and I serve as an advisor on matters of Nature and Culture. We already have our Thanksgiving Address book and our workout video — Secrets of Natural Movement — on the website: https://restorativepractices.com as well as many offerings on tracking. In June I taught a 3 hour online Masterclass in Connection.
http://www.theconnectionmasterclass.com. Through Gabriel I also met and worked with Skeena Rathor of the Extinction Rebellion: https://rebellion.global/ to help her present the Thanksgiving Address for the opening of their Fifth Rebellion, which they are calling the “Miraculous Rebellion.”

Speaking of tracks, we have re-scanned our poster Animal Tracks of Brasil that was designed by our partner project Projeto Pegadas Brasil long ago. We now have it available from our office together with our popular Tracks of the Southwest poster. It measures 20” X 29” and features the tracks of 34 different Brazilian animals, including the capybara, tapir, howler monkey, giant otter, kinkajou, and jaguar. This large poster in sand and earth tones presents a silhouette of each animal together with a front and rear track. Names of the animals are given in English, Portuguese, and the scientific Latin name. US $ 15.00

Since 1986 we have maintained a rigorous schedule of community visits, speaking engagements, camps and mentor trainings, inspiring and teaching thousands and thousands of people, young and old. In the past we could respond to a request from a community who had no funding and somehow, we would make it work. But now, the size of our “extended family” and the number of requests we receive each year is simply too great. Your gift of any size can help us spread the word of Natural Awareness, cultural respect
and the need to preserve wildlife among the many individuals, organizations, tribes and communities that request our services. The DONATIONS page of our website–www.thetrackingproject.org/donate/ — provides some idea of what we are able to accomplish with donations of varying sizes. Send us a tax-deductible contribution…and watch the Turtle work! 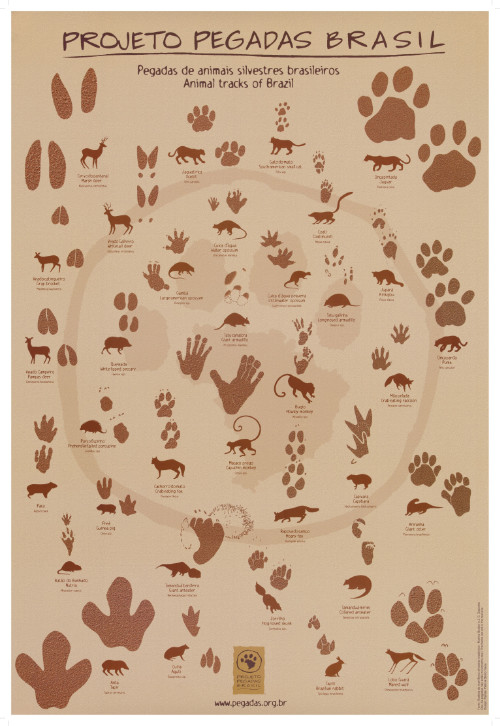