To most Native people in the Americas, the drum is the heartbeat of the Mother Earth, the heartbeat of the community. Last summer we traveled to Victor, New York to take part in the 2004 Ganondagan Native American Dance & Music Festival July 24-25. The theme of this year’s festival was “Earth Rhythm and Beats, ” bringing together drummers, dancers, musicians and performers from many earth cultures.

We joined our friend John Densmore, drummer for The Doors, as well as Anishinabe singer /songwriter Keith Secola & Wild Band of Indians, Soh Daiko, a taiko drum group from New York City, the Silvercloud Singers and many other performers to raise money for the Friends of Ganondagan and the events they sponsor throughout the year. Iroquois social dancing, hand drum making, water drum making and the art of making cornhusk dolls blended with storytelling, drum circles and a family drum jam. Crowds for the weekend were estimated somewhere between 4 – 5,000 people.

Our connection with the Ganondagan State Historic Site goes back to the late 1980’s when the site was first established. G. Pete Jemison (site manager and internationally known Seneca artist) contacted us in 1988 to visit the site and bring some of our programs to Ganondagan. In 1989 a tracking workshop with John Stokes became the very first public event sponsored by the Friends of Ganondagan.

Since that time we have participated in youth camps, music performances, dance workshops, and two large peace gatherings. For the last ten years we have traveled to Victor each summer to assist the elders at the annualGanondagan Youth & Elders Gathering.

As we sat having lunch at the end of last year’s elders gathering, Jeanette put forward the idea of a drum festival and wondered if John Densmore would be interested in headlining such an event. John is an old friend from our days at the Mendocino mens’ conferences of 1989/90. A phone call revealed that he was only too happy to help raise funds for the site, especially as Ganondagan figures as an important site in the Journey of the Great Peacemaker. 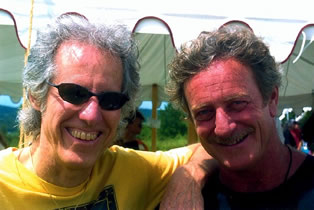 “Light My Fire”—John Densmore, drummer for The Doors, and John Stokes

John has assisted many other native causes over the last decade, including helping to send Hopi elders to Geneva where they testified on human rights abuses and setting up a propane fund for the Cheyenne River Sioux tribe of South Dakota following the “worst winter in recorded history.” In November 2003, John received the Native American Music Award’s Honorary Lifetime Achievement Award for his support of Native American performers, artists and isssues. (From a short bio by Sandra Schulman)

Each day special guests Densmore and Stokes joined Keith Secola & Wild Band of Indians for a raucous afternoon concert. Songs included Doors favorites, such as “Love Me Two Times” and “Riders on the Storm,” as well as Secola classics like the “Fry Bread Song” and “NDN Car.” PowWow dancers and Iroquois social dancers whirled onstage to the eclectic music of the Wild Band.

The organizers later told us that the event was one of the most successful fundraisers they had ever held. It was an honor to be part of the event and especially to play music with John Densmore. We send our thanks to John, Pete, Jeanette, the staff at Ganondagan, the Friends of Ganondagan and to all the musicians, performers and community members who helped to make this event so memorable. Niawen.

For more information on the Ganondagan State Historic site and the programs offered by the Friends of Ganondagan, please visitwww.ganondagan.org