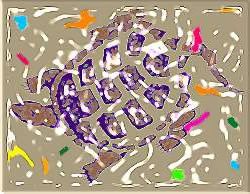 …IT seems that one time down south, long ago, Coyote ate Turtle. When he did, all the ponds and streams dried up, because Turtle was the keeper of the water.

The animals went to Coyote and begged him to bring Turtle back.

Coyote thought about this and then brought Turtle back up. But Turtle was all in pieces and the animals had to put him back together again.
It was not that easy, either. Before he was eaten, Turtle had plates of solid black, white, red or yellow color. But the pieces coughed up by Coyote were so small that they could not be put back together in the same way.

So the animals did the best they could, and Turtle became a beautiful mosaic, each plate shining with tiny shards of all the different colors.
And it worked! Turtle came back to life.  And when he did, the water came back, too.

“This story is a blend of traditional tale and contemporary dream which was inspirational to me in the formation of The Tracking Project.  Back in 1984, I had a series of three dreams in three nights, each one regarding a turtle.  From the Mohawk people I had learned that when one dreams of something three times in a row, it is true.

In the first dream, I saw a huge turtle with plates of red, black, yellow and white.  In the second dream, some careless people had broken the turtle into tiny pieces and those of us who still cared tried to put the turtle together again.  But the shards were so small, we ended up with a brilliant multi-colored turtle rather than the solid plates which had existed before the turtle was broken.

And yet it worked.  In the third dream, I saw the Native people regain their strength, regain their numbers and move out over the back of the Turtle.

When I shared my dreams with a Mohawk poet friend, he told me it reminded him of a Coyote story he had heard once from Guatemala.    And so, this series of dreams gave form to our early work with Native communities and from it, I took our motto “Bringing the pieces together again.”

This is the task at hand—to bring the pieces of our selves, our families, our communities and our global family back together again.  Hidden within the story, symbolized by the 13 plates of the turtle’s shell, is the idea that no one culture ‘has it all,’ that everyone was given a piece of the whole and that we must bring the pieces back together to complete the picture of who we are as a human family and what our purpose here on the earth truly entails.

Please join us in the work.”