The Art of Traditional Peacemaking

“The Art of Peace begins with you. Work on yourself and your appointed task in the Art of Peace. Everyone has a spirit that can be refined, a body that can be trained in some manner, a suitable path to follow. You are here for no other purpose than to realize your inner divinity and manifest your innate enlightenment. Foster peace in your own life and then apply the Art to all that you encounter.”—Morihei Ueshiba, founder of Aikido, from The Art of Peace. 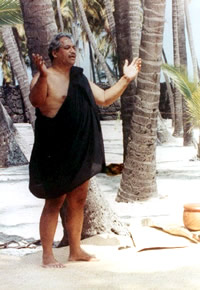 An essential component of The Tracking Project’s program is the art of peacemaking. Just as the true martial arts in their higher form lead to awareness and sensitivity rather than violence, the awareness induced by tracking, together with the Arts of Life, deep listening skills and simply being in nature, can lead to a profound inner peace. In this sense, nature itself is a peacemaker. For us, peace is the not the end of the process to heal the Earth—it is the beginning. Without peace, we will never have the time, resources or human energy to work on the healing of ourselves, our families, our communities or the Earth.Rather than justify the widespread violence of our time with the common belief that “aggression is inevitable,” we have followed the teachings of traditional peacemakers, especially the Great Peacemaker of the Iroquois Confederacy, who remind the world that through our rational mind and a desire for Peace, “thinking can replace killing.” Our work in the Native communities of North America, Australia and the Pacific has introduced us to various traditional peacemaking systems—”whole systems dedicated to preserving the balance and harmony of the community or culture, inherently spiritual systems that are constructed to prevent conflicts by focusing on unity and harmony, that speak of connectedness, that stress more conciliation than mediation, that are capable of healing and that include teaching children the ways of peacemaking.” (Paraphrase from There Are At Least Four Reasons for Revitalizing Tribal Peacemaking, by Diane LeResche, Ph.D.) In addition, traditional peacemaking always contains a cultural/spiritual component which is lacking in mainstream “conflict resolution” techniques.The Tracking Projecthas had first-hand experience with practitioners of the Navajo Peacemakers court, the ‘ohana or family-based Hawaiian system of ho’oponopono, and Kaianerekowa, or the Great Binding Law of the Iroquois Confederacy. We have experienced the effectiveness of these “alternatives to the adversary court system.” Some of our experiences have included:

Ongoing workshops, travels, spiritual gatherings and school presentations in New Mexico, California and Hawai’i with Dave Martine (Ramah Navajo), who works as a peacemaker within the Navajo peacemakers court system. (Since 1982 the Diné [Navajo] Nation has been creating an extensive peacemaking system based on traditional teachings.)

Annual work with the Hawaiian nation and individuals who are working to revitalize the Hawaiian culture, including our work with the late Parley Kanaka’ole and the 1992 ceremony to bring peace and healing to the island of Kaho’olawe (Kohemalamalama o Kanaloa) after nearly five decades of abuse as a bombing range.

Work with the chiefs, clanmothers, faithkeepers of the Iroquois Confederacy, especially Tom Porter and Jake Swamp, including Tree of Peace plantings around the mainland United States and Hawai’i; Tracking the Roots of Peace, an ongoing series of gatherings for natural and cultural awareness; Bringing the Pieces Together Again, men’s gatherings from a Native perspective; and peace gatherings at the Seneca peace site Ganondagan. 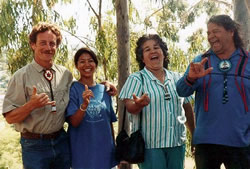 How can techniques of traditional peacemaking be useful today? Jake Swamp has often noted that the times we live in are not dissimilar from those more than 1000 years ago when the Great Peacemaker came among the people of the area now known as upstate New York. In those dark times, disregard for life and “king of the mountain” leadership (rule by the strongest) were widespread. Into this darkness came the Peacemaker and his companion Hiawatha. The story of how these two men established The Great Binding Law could well serve as a blueprint today for peacemaking on a personal and global level. (See The White Roots of Peace, by Paul Wallace, Clear Light Publishers, 1994).In their efforts to end the bloodshed of their times, the Peacemaker and Hiawatha did not merely hope for peace—they established peace as the Law, with three major components:

Righteousness—Righteousness occurs when the people put their minds and emotions in harmony with the flow of the universe and the intentions of the Creator.

Power—The power to enact true peace is the product of the rational thought of a unified people.

After they had established the peace and the council of leaders, the Peacemaker planted a great white pine which “pierced the sky”—the Tree of Peace—as a living symbol of the new order. The branches signify shelter that people may find in the security of The Law. The roots of the tree reach out to the four directions so that anyone who desires might follow one of these roots to find peace beneath the tree. An eagle at the top of the tree represents the watchfulness people must have to preserve and protect peace. And the Peacemaker symbolically uprooted the tree and had the warriors bury their weapons to end their hostilities, as well as their thoughts of war, “for if old stories are to be revived there can never be an end to war.”

A necessary part of the process of peacemaking was the condoling of Hiawatha’s tremendous grief following the loss of his family, for grief has the power to blind our senses to the world. Jake Swamp has noted that today, “the whole world is in grief.” It may be that until we address the deep grief we carry, the work of peacemaking cannot proceed. In this way, the understandings of traditional peacemaking could be beneficial to us all.

The message of Peace is perhaps the most necessary and significant message of our time. Because of this, we advocate and support the revitalization of traditional peacemaking into a recognized system of justice. Perhaps, just as the Great Law of the Iroquois influenced the United States Constitution, the understandings of traditional peacemaking will be adopted by the governments of the world to end the cycle of warfare which now overshadows our human family. We must support the peacemakers and let peacemakers—rather than warriors—become our role models. If we firmly set our attention and intent upon peace, then our actions will lead us to the cool shade beneath the branches of the Great Tree.

(These thoughts on peacemaking were assembled from a training on traditional peacemaking presented to the National Indian Youth Leadership Program in Gallup by John Stokes and Louis Blue Cloud Greensfelder.)