We have arrived at Saltaluokta. One hundred miles north of the Arctic Circle, in the Laponian World Heritage Area, the largest wilderness in Europe. A plane flight from Albuquerque to Chicago, then a night flight over Iceland and the mountains of Norway to Stockholm; an other flight north over the Baltic Sea to Kiruna, then by car south to Gällivare, then west into the mountains where we meet the boat and cross the bay to the Saami village at Saltaluokta. There is a rainbow—one end is touching where we have just landed, the other is touching where we have just come from. 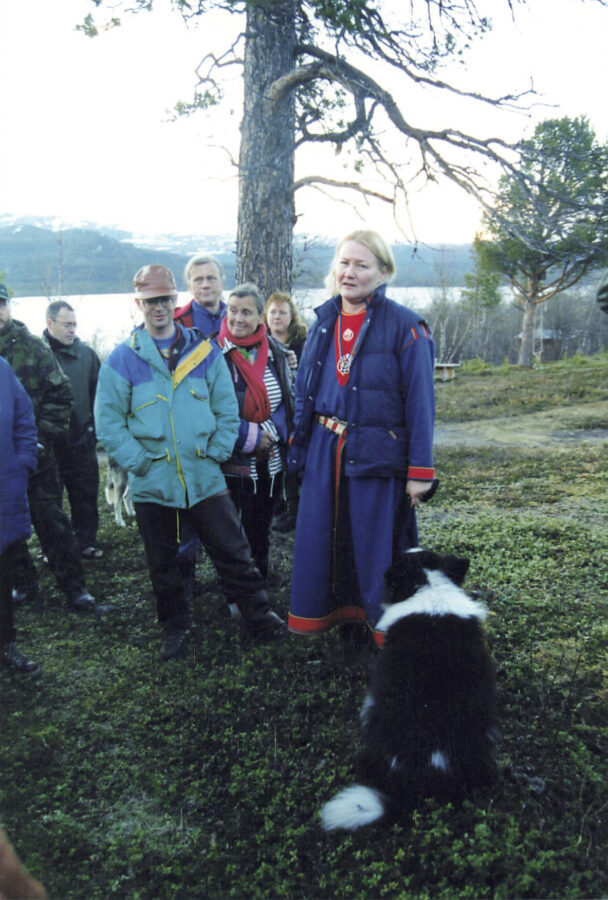 Laila Spik introduces us to Saltaluokta.

Last June we traveled once again to Sweden to take part in a special series of gatherings arranged and sponsored by Göran Gennvi and Natur Akademin. Though we had only two weeks time, our visit included: a tracking/cultural awareness class at Saltaluokta; a meeting in a kåta (traditional Saami shelter) for youth groups from Gällivare (thanks to Leif Wallerström); a “Wisdom Leadership” seminar in Stockholm to help create “visionary leadership” in Sweden; and a tracking class at our friend Pierre’s kayaking center near Björksvik on the edge of the archipelago.

Originally scheduled were two gatherings—a tracking class with our Project and a cultural gathering led by Oren Lyons and his son, Rex, from Onondaga (Iroquois Confederacy)—but circumstances brought the two classes at Salto together as one. So, local trackers, guides and dogsledders from Gällivare and nearby communities joined with artists from Göteborg, including Gun-Britt Lawurn and Sten and Eva Löfman, who had come to spend time with Oren. The time was marked by an atmosphere of cultural respect and an open sharing of cultural ideas and traditions. Miki Maeshiro later noted that this atmosphere of respect is a core element of The Tracking Project‘s programs: creating an atmosphere within which culture can be shared and appreciated.

Each day, teachings of natural movement, traditional firemaking and tracking were mixed with information from the Seminole, Miccosukee, Iroquois and Hawaiian cultures.

Our hostess—Laila Spik, Saami artist, storyteller and wisdomkeeper— together with elders from the community, offered teachings on Saami history and culture, beliefs regarding the animals and stories of the reindeer.

There was much talk about survival and about the need for coming together as a community. John Stokes shared something he had learned from a Mohawk leader many years before: “People try to study techniques for building communities, yet communities actually build themselves. We don’t really have to build communities. We only need to block the things which block community—things such as greed, anger, jealousy and other emotions. Then community builds itself.”

At night, we partied inside the kåta, telling stories, dancing, and playing music. Guitar music from the Everglades, yirdaki songs from Australia, hula from Hawai’i. The Saami men—Apmut Ivar, Lars and Anders—told long tracking stories of the reindeer, the bear and the lynx. And when it seemed like the night was about to end, the Saami began to joyk—beautiful songs of the forests and the reindeer, songs their mothers had sung to them when they were children.

On the final day, we shared some techniques for relaxation, self-healing and longevity from various Chinese energy systems. As Apmut Ivar and Lars listened, they nodded in agreement. “We do these things, too, when we herd the reindeer. Otherwise, your head is filled with too many thoughts.”

We had brought some of the “water of life” from the water ceremony which we performed at our Mentor Program Reunion in the mountains of New Mexico the year before. John and Andy described the ceremony, then Andy led the group in a blessing and revitalization of the waters at Saltaluokta. A good steady rain for the next five days was an answer to our prayers.

Several days later we joined up again with Oren, Rex, Laila, Göran and others in a castle south of Stockholm for the “Wisdom Leadership” gathering, which was attended by a diverse crowd of Swedish professionals, from doctors, lawyers, architects, and psychologists to ski guides, filmmakers, actors and storytellers. The Tracking Project team opened the gathering with a Thanksgiving blessing in Miccosukee and English, which was followed by a keynote speech by Oren on the international marketplace, nature, the need for visionary leadership and the importance of Native people in the survival of our human family.

Regarding the knowledge that the Saami people possess for living in their harsh circumpolar homeland, Oren had asked a Saami one time, “What do you need to survive here?” The man had answered after some thought, “My long knife, my short knife, matches and the reindeer.”

After lunch, we led the entire group in a series of stretches and moves from our Secrets of Natural Movement workout, followed by some tracking concepts and exercises to open the senses. John and Oren spoke about the animals, the hunting tradition and how much there is to learn from the natural world. Inside, Laila told the group a Saami story and a young Cree dancer from Canada, Brian Klyne, performed a hoop dance with 18 hoops for the audience.

Our final class took place near the shores of the sea east of Stockholm, at Pierre and Karina Egholt’s kayaking center, Torpet. Pierre, an associate from our trips to Sweden and a member of our mentor circle, uses kayaks to train people how to be “balanced in nature.” Our friend Ole Kristiansson returned with friends of his to join us and others for three days of tracking, stalking, natural movement, firemaking, arnis and the Arts of Life.

Rolf Olsson, co-author of Friluftsliv och Hantverk, a handbook of traditional/natural technologies, joined our group, bringing his tremendous knowledge of the Swedish bush. One afternoon, using his cup carved from the burl of a birch tree as a model, he shared some thoughts on the terms “primitive” and “sophisticated”:

As in Salto, we celebrated each night with music and storytelling. At the conclusion of the class, John and Andy led the group in a Water Ceremony for the renewal and revitalization of the waters at Torpet. 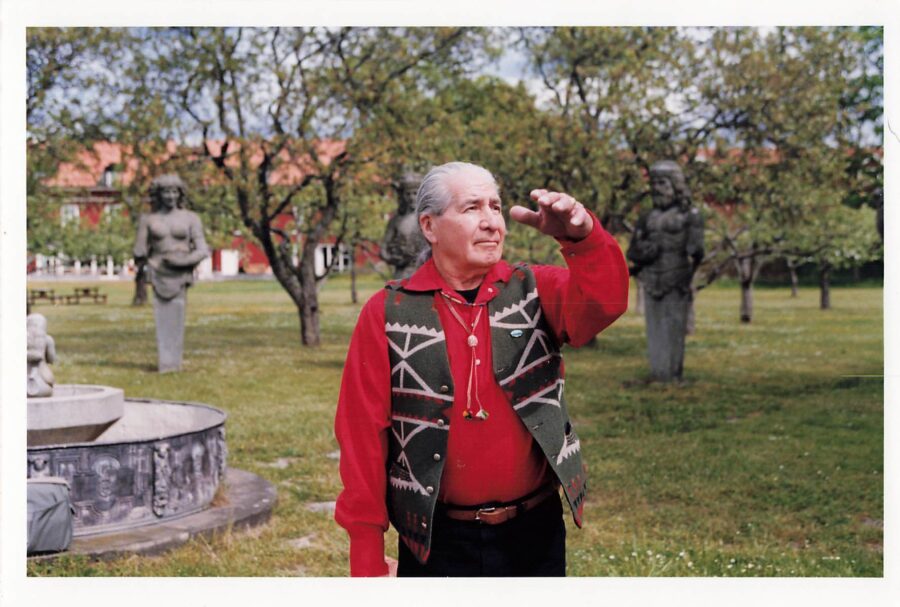 Miki Maeshiro with Andy and Helene Buster in Sweden at the Wise Leadership gathering.

We are very thankful to Göran, Ole, Leif, Laila, Nancy, Pierre, Karina, Björn, Sara & family, Andreas, Janne, Tonya Moyaof the Green Cross Sweden, and all our friends in Sverige for their hard work, friendship and hospitality. Our work there continues to take root and spread. We invite you all to join us in June 2002, when we will return to Sweden for more camps and classes including: a cultural awareness/tracking class in the northern mountains, a new tracking & kayaking class into the Swedish archipelago, and the first year of a Dreamtracking camp for Swedish girls.

This is Sapmi, the land of the Saami, the people of the Sun and the Wind. Mid-June in the land of the Midnight Sun. Sun dipping below the horizon for a few hours before rising again. Moose chews on the pine trees, reindeer tracks on the trail. Stars circling overhead, around the North Star, the Pillar of the World.