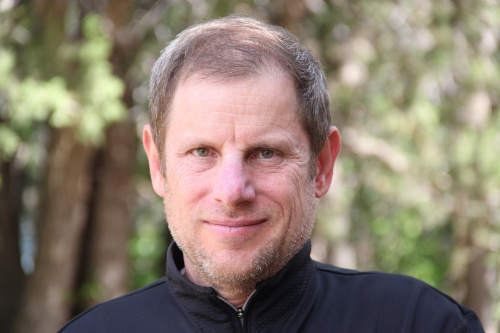 Cary Odes is the Tracking Project‘s on-call Professional Comedian and in-house Mortician. Cary has been performing as a stand up at clubs and colleges across the country since 1980. In 1989 he met John Stokes while they were both working at a men’s conference. That fall, John had him entertaining in a cave during a thunderstorm and teaching wilderness skills he had learned only an hour before.

He has been called upon to mock all of the elders and mentors that pass through the Tracking Project‘s workshops, but especially its director, John Stokes. Mr. Stokes is fond of saying that humor is one of the most vital survival skills. Cary’s reponse is, “Who would you rather be lost in the woods with? John, who could make you a house out of bark, or Cary who could keep you laughing till you died of exposure?”

Cary’s career outside of the Tracking Project includes over twenty appearances on television as a stand up as well as several guest-starring roles as an actor. He has warmed up the audiences on some of the top sit-coms, such as Home Improvement and Mad About You. Cary has taught stand up to teenagers, both in a high school setting and to gang members in prison. He has written for television and co-wrote an award winning short film, which was optioned by Steven Spielberg.

He is divorced and reportedly impossible to live with.