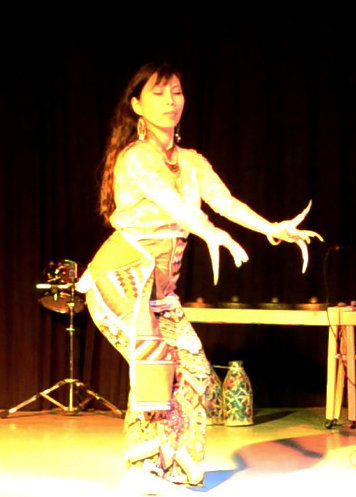 A webdesigner, singer-songwriter, and theater artist from the Philippines, Geejay is The Tracking Project’s web designer of 20 years.  She met the The Tracking Project staff during the TTP mentor training organized by the Initiatives for International Dialogue in Davao City, Mindanao, South of the Philippines. Inspired by the training, she and three other women participants co-founded the all-women performing group Mebuyan Peace Project.

Geejay has been involved with various non-profit organizations doing cultural, international, and peace work for over 30 years. As a member of Kaliwat Theater Collective in Davao, Geejay worked alongside indigenous peoples in their quest for their ancestral domains and conducted research on indigenous peoples’ myths, legends, and traditional art forms. Geejay was also communications and popular education coordinator for the Mindanao Commission on Women, where she trained women political leaders in peacemaking. She documented and co-facilitated the commission’s project “If Women Negotiated the Peace Panel”—the results of which were presented to the Moro Islamic Liberation Front (MILF) and Government of the Republic of the Philippines GRP) Peace Panels for their series of peace talks in 2008.

Geejay moved to Jacksonville, Florida in 2011 where she had a flourishing career in internet technology, had a brief stint as performance director of a local charter school, and is now HR Director of a group of chiropractic and primary care clinics.