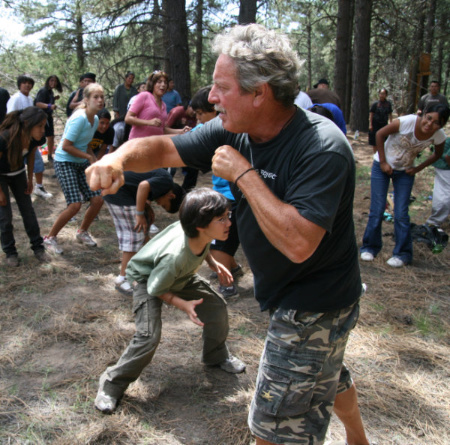 John Stokes, founder & Director of The Tracking Project, Inc. in Corrales, New Mexico, is a well-known musician, performer, writer and teacher of tracking. Since 1980 he has worked and traveled extensively in his efforts to bring awareness of the natural world and the integrity of indigenous peoples to interested people around the world. Born in Lakewood, Ohio (1952), he spent much of his early life on the Gulf coast of Florida. He graduated from Princeton University (B.A. 1974). After college, John worked as an assistant to the Senior Editor at the Beacon Press from 1975 – 1977, generating new titles in the area of social awareness. From l978 – l984, he taught language and music skills at Tauondi, Inc. (formerly known as the Aboriginal Community College) in Adelaide, South Australia. Work with this community – initiated college dedicated to Aboriginal self-management brought him in contact with tribal, rural and urban Aboriginals from communities around Australia. His involvement with Aboriginal land rights causes introduced him to the global indigenous network. Through friendships with traditional elders— notably the distinguished tracker Jimmy James of the Pitjantjatjara— John became aware of the need to preserve the wealth of indigenous knowledge regarding the natural world. He clearly saw the role traditional tracking and bush survival skills could play in training and enhancing the cultural and natural awareness and self-esteem of a community, especially the youth. For further study in Native American style tracking, John worked and studied at Tom Brown’s Tracking/Wilderness Survival School , New Jersey in 1984 & ‘85. During this time he initiated tracking/survival outreach programs to Native American communities, held Native youth workshops and lectured in universities. His work with the Mohawk nation newspaper Akwesasne Notes led to a series of workshops with Ray Tehanetorens Fadden and John Kahionhes Fadden at the Six Nations Indian Museum in Onchiota, New York. Classes with Native youth soon followed throughout the Northeast and in the Four Corners area of the Southwest. To meet growing requests from Native communities, John established The Tracking Project (TTP) in 1986 as a not – for – profit organization. TTP is dedicated to working with community educators and Native elders from around the world to design a series of teachings which connect individuals directly to the natural world. These programs of natural and cultural awareness inc lude a wide range of skills—from traditional tracking and survival skills to music, storytelling, dance, peacemaking and martial arts training. The name Arts of Life was chosen to describe these programs which emphasize indigenous knowledge, the lessons of Nature and the power of art. Over the past twenty years John and a diverse team of artist/ educators and traditional Native elders have shared this unique awareness program with more than 100,000 people of all ages. Through Nurturing the Roots , a community mentor program, the Project’s work with the international community now includes partners/programs in Hawai’i, Brazil, the Philippines, Spain, Japan and Australia. John has designed a wide range of programs and curricula to meet the diverse needs of the many communities working with TTP:

* Secrets of Natural Movement , a workout system based on energy work and animal forms, promotes physical, mental and spiritual well-being

* The Art of Tracking provides tracking courses for the public

“Bringing the Pieces Together Again”

The Tracking Project’s vision of “bringing the pieces together again” has inspired the formation of numerous organizations:

Projeto Pegadas Brasil , a branch of The Tracking Project based in Brasília, Brazil

Santa Fe Council for Environmental Excellence Wild Friends , a program of the Center for Wildlife Law ( University of New Mexico ) which advocates wildlife preservation through education

Mebuyan Peace Project, a collective of Filipina artists, composers and performers in the southern Philippines dedicated to peace activism

In This Place, a nature-based youth project, including The Tracking Way, a magazine for teens dedicated to art, nature and cultural awareness.

John Stokes has written numerous articles and several books, including: Aboriginal Country Music Festival (a paperback published in Australia in l980) and Thanksgiving Address: Greetings to the Natural World , a version of the traditional Iroquois opening address, published in 1993 by The Tracking Project together with three Mohawk groups—Tree of Peace Society , Six Nations Indian Museum and the Native Self Sufficiency Center. The original Thanksgiving Address was published in the English and Mohawk languages. Since that first edition, other versions have been printed in German/Mohawk(1997); Swedish (1998); Spanish (1999); Japanese (1999); Portuguese (2000); Bisayan (2002) and French (2004) with more than 54,000 copies of the book in print. His stories have been anthologized in: Walking Swiftly—a collection of works celebrating Robert Bly’s 65th Birthday, 1992; Nanao or Never—a collection of stories celebrating the life of Japanese poet Nanao Sakaki; and The Soul Unearthed: Celebrating Wildness and Personal Renewal Through Nature, edited by Cass Adams, 1996. John has been the subject of writings by noted Native American writer and storyteller Joseph Bruchac in Tell Me A Tale: A Book about Storytelling, Harcourt Brace, 1997). Jim and Joseph Bruchac also write of his work in At Home on the Earth (Modern Curriculum Press, 2001) and in Native American Games and Stories (Fulcrum Publishing, 2000) Other writings include: the foreword to Song & Silence: Voicing the Soul, by Susan E. Hale (La Alameda Press, 1995); articles for Orion Afield (2000), the Traditional Studies Journal (1997-2000); Akwesasne Notes (1984 & 1985); Indian Time (1985); Raise the Stakes (1981); Fellowship in Prayer ( 1984); the EastWest Journal (May, 1978) and other environmental magazines. Articles about his work with The Tracking Project have appeared in numerous magazines and journals in the United States—Audubon (March 1991), New Age Journal (March 1994), Akwesasne Notes ( Spring 1997), Business & Industry Connection Magazine (March/April 1993, May/June 1993 and November/December 1993) as well as magazines in Sweden and Brazil. Interviews with John have appeared in Wingspan Magazine, Santa Fe Lifestyles, Resonance Magazine, Rocky Mountain Spiritual Emergence Network, New Age Journal, Guide Ressource (a French Canadian magazine) and The Journal of Family Life. He is currently working on a book of stories about tracking.