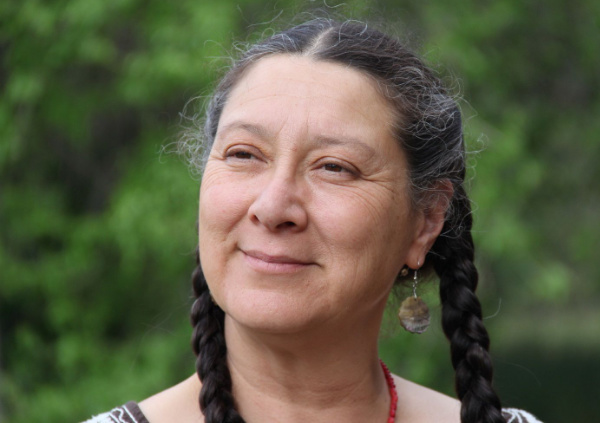 Karen grew up on the Flathead Indian Reservation in Western Montana. Her Depression-era parents were thrifty; they gardened, composted and recycled. Hunting and fishing, gathering berries, herbs and mushrooms and putting them up for winter was a way of life. Karen’s Auntie Helen used to say ” A lot of healing starts in the kitchen.” Using herbs was always the place to start when anyone was sick. As a bored 11 year old, Karen learned to make baskets from one of her mother’s friends. In the same way, she learned many other skills: beading, leatherwork, tanning, crochet, knitting, spinning, weaving, felting, origami, paper making, and lots of other skills in the age before computer games.

Karen studied botany at the University of Montana. She earned a bookkeeping degree from Montana Tech in 1981 and helped to found the Missoula Urban Demonstration Project ( sustainable systems in and urban setting) in 1984. That same year, she became a partner of the non-profit Garden City Seeds, where she was in charge of the greenhouses and germination testing for over a decade. Karen was a founding member of the Hamilton Farmers Market Coop (where she continues to serve as a board member) and she helped to found the Bitterroot Educational Awareness Resources (BEAR) in 1993, a non-profit environmental education corporation.

Karen met The Tracking Project in 1996 when she was asked to do an herb walk as a guest presenter. She fell in love with firemaking and found that tracking and observation skills helped her make sense of the patterns she had been looking at her whole life.

Karen completed the Tracking Project’s community mentor program in 2014. She has been cooking and teaching about herbs and various crafts at the Dreamtracking camp for girls and the Tracking in the Southwest course for adults since 2000. She currently has a micro farm and greenhouses in western Montana where she sells medicinal herbs at the Missoula & Hamilton farmers markets.