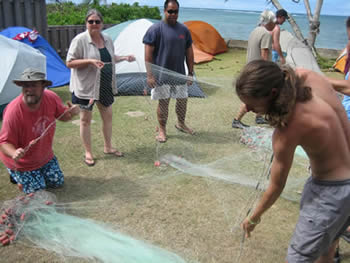 Dick Elder, Trish and Noel fold the net as Kanani and Noland look on, Punalu‘u, 2007. / photo by Cary Odes

In June we completed the third and final year of Nurturing the Roots / Cottonwood, a mentor program with our local Montessori school, which began in the mountains of New Mexico in 2003 and concluded on the shores of O‘ahu, Hawai‘i. It was the first time that an entire school—from Administration to classroom teachers—embarked upon the three year training, and the success of this program will serve as a benchmark for many years to come.

The process began in 2003, when Principal Trish Nickerson sat down with John Stokes of The Tracking Project (TTP) to make plans. A three day pilot course took place that year, to provide a preview of the mentor program for the staff and allow the teachers to decide whether or not to participate. In 2004, the program began, with the training open to the spouses of the staff as well as the staff and associates of TTP. Years 1 and 2 would take place in New Mexico, with Year 3 planned to conclude on O‘ahu with the assistance of Miki Maeshiro, a graduate of the original NTR program (1998), musician Brother Noland and his wife, Heidi, as well as graduates from the Alaka‘i Project, a Hawaiian mentor program which concluded in 2004.

TTP staff, mentors and participants gathered on O‘ahu on June 1 and traveled to Hale Punalu‘u, a training facility on the North Shore, made possible by the Kamehameha School. For the third time, participants were immersed in the key areas of our curriculum: Thanksgiving, Traditional Tracking & Survival Skills, Nature Awareness, Peacemaking, Cultural Awareness, The Arts of Life, Personal Development, Community Education, Ceremony and Renewal. Only this time, Brother Noland, Heidi, Miki, Anna Lee Lum and other members of the Hawaiian team led the experiential workshops “Hawaiian style”—reading currents, throwing net, laying net, lei making… and participants learned Hawaiian protocol for visiting wahi pana (sacred sites), greeting the day and giving thanks.

At the final banquet, we presented certificates of completion to 33 mentors, including Trish, her husband, staff from Cottonwood, Brother Noland, Heidi, Joel Glanzberg and associates/staff from The Tracking Project.

Nurturing the Roots originated from the vision of a traditional Hawaiian elder who saw in 1991 that The Tracking Project was in a position to bring together artists/educators, activists and indigenous leaders from around the globe to share with one another their cultures, stories, arts, and successful teaching strategies with the goal of creating a global network that would train trainers in indigenous knowledge and community revival.

The teachings of NTR are already being utilized on the grounds of the Cottonwood School—our Secrets of Natural Movement exercises are part of the school’s daily Brain Gym, the Thanksgiving Address has become a theme for many classes and school functions, stories and storytelling enjoy a heightened value in the classroom and both teachers and students are enjoying nature outings on a regular basis, augmented by the awareness of tracks and tracking.

We extend our gratitude to everyone who took part in this successful program—participants, staff, and mentors—with special aloha to Trish, the staff of Cottonwood, the Kamehameha School, the Pagoda Hotel, and all our ‘ohana in Hawai‘i.