In 2003 we sat down with the Aurora Foundation to devise a strategy for an outreach initiative which would strengthen our existing global mentor network and and expand our work into new areas. We chose the vast, culturally diverse “triangle” formed by the Hawaiian Islands, the islands of French Polynesia and the heart of Brazil as the focus of our work. Through a series of journeys into these regions over the last six years, we have been able to grow exponentially—identifying new mentors, meeting new community artists/educators for future programs, and locating new circles of interested people. 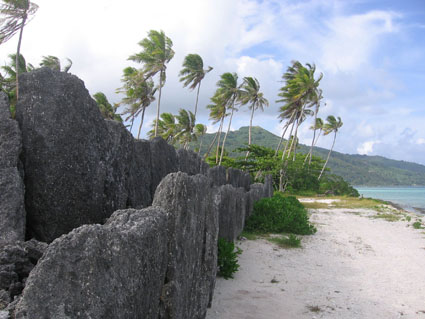 The walls of Marae Anini on the southern shore of Huahine Iti, February 2010. Photo by John Stokes.

In 2010 we once again visited French Polynesia, where we have established a small network of friends, artists and cultural practitioners. Most of our time was spent on the island of Huahine, an island rich in history and cultural sites, where we visited with our friends, sharing the news from the mentor network and formulating plans for a possible future mentor training.

A small brochure prepared by the Opu Nui Association describes the cultural heritage of Huahine: “Huahine consists of two islands, Huahine Nui and Huahine Iti, which are connected by a bridge. Recent archaeological discoveries indicate Huahine’s history goes back at least 1100 years. Huahine Iti and Huahine Nui composed together eight districts in ancient times. Huahine is renowned for its village of Maeva, where all district chiefs once lived side-by-side and worshipped their ancestors at their respective marae—open air stone structures built for religious rites and ceremonies.”

With our friends Vetea, Donna and Miri, we visited most of the major marae on the islands. Starting from the museum and cultural meeting house known as Fare Pote‘e, we climbed Mata‘irea Hill to visit the many marae that dot the slopes. From the area known as Te Ana and Marae Tefano, we came to Marae Mata‘irea-rahi, which is considered to have been the most important marae on Huahine. In the heat of the afternoon, we visited Marae Manunu, where Tane, the god of humanity and perfection, as well as Oro, god of war and fertility, had been worshipped. We finished our tour at the southernmost end of Huahine Iti, at Marae Anini, where the noni trees grow right up to the afa‘i turui, upright stones which served as backrests for the gods.

In the short time we have been visiting Huahine, we have noted a steady growth of caring for and use of the traditional marae. Sites that were overgrown and covered in trash in 2004—such as Marae Anini—are now clean and kept clear of brush by groups of young locals. Miri told us that she had even attended a ceremony at Anini in the past year—something she had never done before.

The revival of caring for the marae has led to a revival in the traditional celestial calendar and traditional ways of managing resources based on periods of abundance and shortages. “In traditional Polynesian society the appearance and disappearance of the Pleiades constellation in the night sky (called Matari’i in Tahitian) marked the beginning and end of the seasons. The season of abundance called the Matari’i i ni’a begins around the end of November, which marks the end of the season of shortage, called the Matari’i i raro. The transition of these two seasons was a key moment in ancient Polynesian life and was celebrated through rites and rituals.” As the links between humans and the environment are being revitalized, the wisdom of the traditional ceremonies and practices is being rediscovered.

Maururu to our friends and hosts in the islands: Vetea, Brenda, Hanson, Vaea, Tehina, Eva, Miri, Tihoti, Jean-Claude, Elvis and his family….

Our work within “the Triangle” will continue, thanks to the vision and support of the Aurora Foundation. In February 2011 we will travel to Hawai’i and Tahiti once again to continue our mentor outreach, and we will hold courses in Brazil in April and October. Join us in bringing the pieces together again, creating a circle of caring people to join hands in the protection of land and life.