In 2010 we followed the tracks of the onça pintada (painted jaguar) once again to the heart of Brazil where we found the fire from our teachings still burns brightly in the hearts and minds of our young students, os rastreadores Brasileiros. In April we returned to the Alta Floresta region in the state of Mato Grosso to extend the support of our mentor outreach program to the young people, many of whom had joined us at our camp in 2008. And in October we visited Brasília, the “home base” of our partners Projeto Pegadas Brasil, for two interesting gatherings with young people—a four day tracking course near the waterfalls at Macaquinho in the Chapada dos Veiadeiros and a youth training at the campus of UNIPAZ (the University of Peace).

These visits are part of our on-going mentor outreach program into the vast, culturally diverse “triangle” formed by the Hawaiian Islands, the islands of French Polynesia and Brazil, a plan which we devised through discussions with the Aurora Foundation in 2003. Through a series of journeys into our target areas over the last seven years, we have been able to identify new mentors, meet new community artists/educators for future programs and locate new circles of interested people. 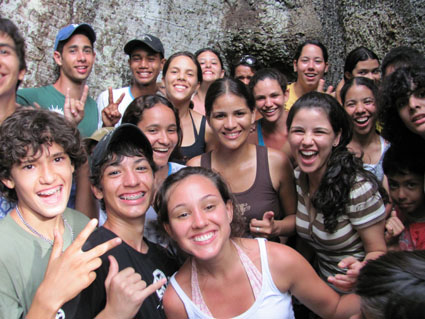 A group of our students gather inside the catana (buttressed roots) of a samauma tree near Verde Paraiso, Alta Floresta, Brazil, April 2010.

Past journeys to Brazil have included: work in the Yawanawá community Aldeia Nova Esperança in the Upper Amazon (2004); Círculo dos Saberes, an indigenous youth and elder circle in Mato Grosso (2005); Círculo dos Saberes II (2007); a staff training in the Kurá-Bakairí village Kuiakware, Mato Grosso, and Círculo dos Saberes III in the village of the Umutina, Mato Grosso (2008); and a tracking course at Rio Preto da Eva, near Manaus, Amazonas (2009). From 1998 until 2005, our work in Brazil was organized and hosted by the staff of Projeto Pegadas. Since that time, the people from Pegadas have been assisted by the members of our mentor network who graduated from Nutrindo as Raízes (Nurturing the Roots), the mentor program for Brazil which ran from 2003 through 2005.

Funding for Projeto Pegadas and the mentor outreach programs has been provided by the Aurora Foundation.

The trip in April began with a visit to Brasília, which was celebrating its 50th birthday the day after we arrived. Before we left for Mato Grosso, we had time to get together with 20 members of our mentor network at Mormaii where we had a short meeting and a small water ceremony at the nearby lake. The next day we flew with our long-time associates Luara Presotti Carvalho and Edison Luís Guedes Neves to Cuiabá, where we missed our connection to Alta Floresta, but bumped into some of our young Indian friends from the Pareçí tribe who had taken part in Circulo dos Saberes in years past! Later that evening we continued on to Alta Floresta where we met more of the mentors from Mato Grosso.

The following day we drove to Verde Paraíso (Green Paradise), the site of our camp, and organized ourselves for the arrival of the young people. This visit was organized by our friend Irene, who is currently serving as Minister of the Environment for the district of Alta Floresta, and the mentors of Mato Grosso. Using attendance at the course as a prize for the winners of the best environmental projects and presentations, they had gathered a group of 34 very dedicated young people and for the next three days we engaged in an action-packed Arts of Life / The Art of Tracking workshop. A highlight was taking the group tracking on a short trail that Jose had marked for us which revealed the tracks of anta (tapir), coelho (rabbit), cachor-ro do mato (fox-like canine), veado (deer), tatu (armadillo) and other local animals. On our way back to town at the conclusion of the course, we stopped to visit a giant samauma tree whose buttressed roots were so wide that it required 27 people with outstretched arms to circle the base! (Thanks to Edison Luís, Bento, Luara, Rodrigo, Renata, Grazi, Simone, Mariana, Irene, Marcos, Jose Alexandro and all the mentors from Mato Grosso and Brasília.)

In October we once again traveled to Brasília where the seasonal rains began to fall almost the moment we arrived. The next day the participants for this tracking course organized by Projeto Pegadas began to arrive from all over Brazil—58 trackers from Manaus, Fortaleza, Curitiba, Campinas, São Paulo, Forianopolis, Maranhão, João Pessoa, Bahia and Brasília! By bus and car, we all then traveled north from the city to a camp called Macaquinho (little monkey) where we spent the next four days. 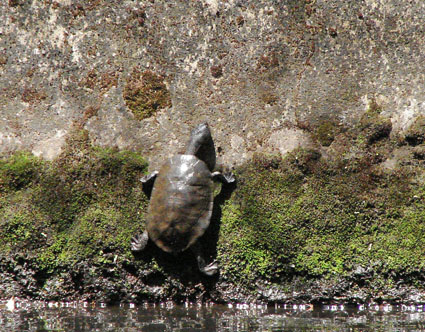 As we did our closing circle at UNIPAZ (University of Peace), a turtle began to scale the wall of the pond—“the impossible task”! Brasília, Brazil October 2010. Photo by John Stokes.

The fine, white sand of Macaquinho offered us great conditions for tracking and the presence of the nearby cachoeiras (waterfalls) gave us relief from the brilliant sun. A line of “controlled burn” fires set by local farmers came so close to our camp that the ash covered our tents, but that night the Thunderers visited us and brought drenching rains which doused the fire. But the true highlight of this camp was the presence of the young people—some as young as eight years old and some now in their 20’s who had first attended Pegadas courses when they were still teenagers. What an inspiration to see how the teachings of our project have shaped their lives and the ecological projects they are currently involved with!

Back in Brasília we met with some of our Brazilian advisers and the staff of Projeto Pegadas to put together a plan and a budget for an upcoming book on the history of our work in Brazil since 1998. Our vision is to share the model of how we engaged the youth, working with them in Nature, sharing techniques to preserve the Natural World and working with Native youth and elders to preserve the treasure of indigenous knowledge that exists in this vast country.

At one of our Pegadas courses in 2000, a young woman named Belinha Crema mentioned to me that her father had been one of the founders of UNIPAZ and that perhaps one day we could hold a tracking course there. Ten years later, Bela noticed on our website that we would be in Brasília at a time that would coincide with a youth training that she and her husband Luís help to coordinate. For several months we made the plans and on this trip we were able to join a group of almost 50 young participants and staff from UNIPAZ who are engaged in a 15-month peace-based training. We called the training Tracking the Roots of Peace, and in the short time we had we presented our Arts of Life program together with some of the traditional peacemaking curriculum we have assembled over the past 25 years.

From our opening fire and Opening Words to the workout, the Arnis, the stalking (monkeys dropped out of the trees to play when the students got quiet and began to walk silently!), the music and the theater games we played, these young people distinguished themselves by the clarity of their minds and the depth of their insights into the roots of peace. As we engaged in our closing ceremony by the water in front of our meeting place, a turtle began to climb the concrete wall that rose vertically from the pool of water. Everyone was able to turn and watch this rock-climbing turtle. To me, the turtle’s efforts symbolized the “impossible task,“ like the Peacemaker carving a canoe from white stone in the Iroquois Journey of the Great Peacemaker. It was a magical and fitting way for this strong camp to conclude.

We look forward to future projects with UNIPAZ and we are thankful to Bela, Luís, Rodrigo, Luara, the staff of the youth programs and all the others who made this first outing so successful.

Our work in Brazil continues to shine brightly, thanks to the Aurora Foundation, the people of Projeto Pegadas, our mentor circle and the many individuals who assist us in this valuable project. Temos saudades for our many Brazilian hosts and friends for their dedication and hospitality.