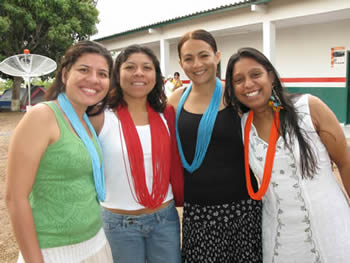 In 2003 we sat down with the Aurora Foundation to devise a strategy for an outreach initiative which would strengthen our existing global mentor network and expand our work into new areas. We chose the vast, culturally diverse “triangle” formed by the Hawaiian Islands, the islands of French Polynesia and the heart of Brazil as the focus of our work. Through a series of journeys into these regions over the last six years, we have been able to grow exponentially—identifying new mentors, meeting new community artists/educators for future programs and locating new circles of interested people. In the case of Brazil, which has already brought forth Projeto Pegadas—a Brazilian arm of our Tracking Project—in 1998 and Nutrindo as Raízes—a second-generation mentor program (2003–2005)—another marvelous flower has now grown. From the inspiration of two of our mentor graduates—Isabel and Andreía Taukane of the Kura-Bakairí people and other members of their family—has come Círculo dos Saberes (Circle of Wisdom/Knowings), an indigenous youth and elder gathering which creates a space for reflection on themes linked to natural and cultural awareness.

Using the image of the circle, with no ending and no beginning, and the idea of the elders or “wisdomkeepers” of the community as the roots of the community’s survival, Isabel has “localized” the Tracking Project Arts of Life model to help her people recover and celebrate their traditional knowledge and respect for nature. At the gatherings, the youth are presented with the opportunity to learn a variety of traditional skills, from firemaking, the production of traditional musical instruments, basketmaking, medicinal plants, to theater, history, poetry and music. 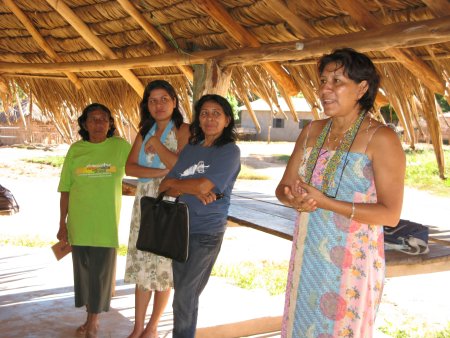 In May Solar Law and John Stokes traveled to Cuiabá to support Isabel and 16 young indigenous people chosen by her for a training in the Bakairí village of Kuiakware (a ten hour bus ride from Cuiabá). A team of mentors from Brasília—Luara Presotti, Andreía Andrigueto and Mariana Ribeiro—arrived to assist the staff training. Together with Isabel’s grandparents— Vilinta and Carlos Taukane—and other members of her family, we spent a productive week, training in Kuiakware and later visiting the nearby villages of Pakwera and Painkum.

In October, Solar, John and Luara returned for the gathering, joined by other members of our mentor circle from different parts of Brazil. Círculo III was held October 9–11 in the village of the Umutina people, eight kilometers from the town of Barra do Bugres in the state of Mato Grosso, and was coordinated by brothers Vanildo and Luciano Ariabo Quezo. These two distinguished young men mobilized the young people of the village and united themselves to host this event. This year’s gathering was attended by members of the Umutina, Bakairí, Paresí, Chiquitano and Bororo peoples. 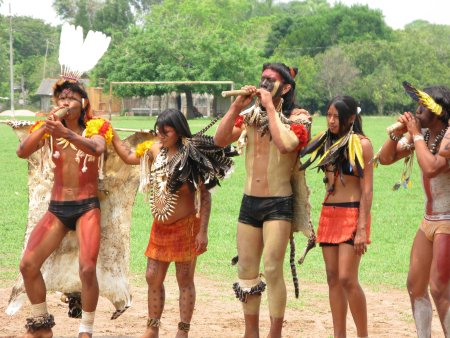 Young men and women of the Umutina people, hosts of the 2008 gathering.

Our days were filled with activities and learning. The Secrets of Natural Movement workout was popular. Eliane Brasileiro shared her love of music and her songs with the young people, leading them through workshops to appreciate the wide range of sounds humans are capable of making. Marcio Bororo contributed his music and Dorothy Mayron Taukane showed the young girls how the Bakairí are taught to spin cotton, learning while playing.

On the first day, Solar and John demonstrated traditional firemaking for all the youth, assisted by Luciano. Later that day, many of the young men took us to the home of Elder Joaquim Umutina to discuss the traditional fire of the Umutina. The following day Joaquim made a special appearance to share some history of how the Umutina were governed in the old days and how it was the fireflies who had shared the knowledge of making fire with the human beings. 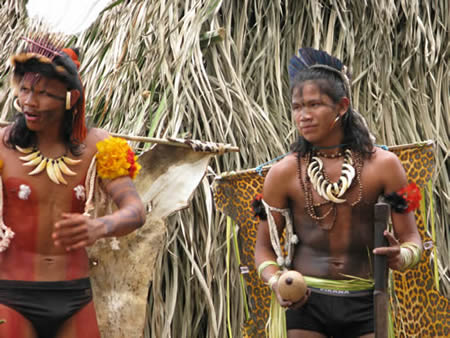 Cleomar and Luciano, leaders of the Umutina dance group, October 2008.

Firemaking was a focus of both the May training and the October gathering. Dorothy has noted in her report that in the old days, people who could make traditional fire were called (in Bakairí) “Tywoiguem,” which could be translated as “the ones who were prepared in the science of making fire.”

And around the fire, both day and night, we enjoyed the vast array of dances that the young Umutinas have prepared with the help of their elders.

Isabel has envisioned that the gatherings will circulate among the indigenous villages of Mato Grosso. Círculo I took place in the Bakairí village Painkum and was attended by people from six different tribes. Círculo II, held in the Formoso village of the Paresí, attracted members of 11 different tribes: Bakairí, Paresí, Umutina, Manoki, Munduruku, Terena, Xerente, Chiquitano, Nhanbikuara and Xingu. 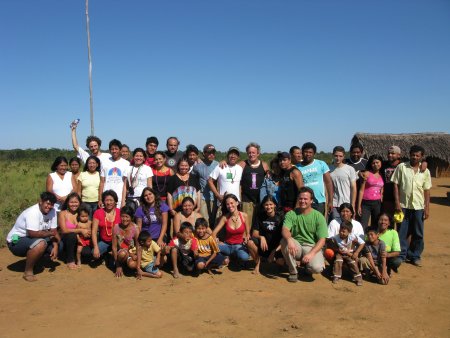 Our staff, trainees, and the people of Kuiakware, Mato Grosso, Brazil, May 2008.

Círculo dos Saberes is an example of what can happen when the right seed is planted in the right soil in the right conditions. Nurturing the Roots originated from the vision of a traditional Hawaiian elder who saw in 1991 that The Tracking Project was in a position to bring together artists/educators, activists and indigenous leaders from around the globe to share with one another their cultures, stories, arts, and successful teaching strategies to create a global network that would train trainers in indigenous knowledge and community revival.

Our work in Brazil, Hawai‘i and Tahiti will continue, thanks to the vision and support of the Aurora Foundation. In May 2010, we plan to travel to Cuiabá to join Isabel and her team for Círculo dos Saberes IV. We extend our blessings and thanks to Isabel, Andreía, Dorothy, Solar, Luara, Martha, Eliane Brasileiro, Vanildo, Luciano, their families, friends, elders, supporters and all the indigenous people of Brazil.