Once again we focused on an outreach initiative which would strengthen our existing global mentor network and expand our work into new areas. We chose the vast, rich “triangle” formed by the Hawaiian Islands, the islands of French Polynesia and the heart of Brazil. Through a series of journeys into these regions we were able to grow exponentially, meeting new mentors, identifying new areas and community artists/educators for future programs. In the case of Brazil, though our planned visit was canceled, a marvelous flower grew from an earlier seed. This outreach initiative was developed through conversations with the Aurora Foundation, which has supported our mentor vision since we initiated the mentoring process in 1995. From that time to the present, we have been able to host and/or take part in the following programs:

During the three-year program (one week per year for three years), NTR participants are immersed in the key areas of our curriculum: Thanksgiving, Traditional Tracking & Survival Skills, Nature Awareness, Peacemaking, Cultural Awareness, The Arts of Life, Personal Development, Community Education, Ceremony and Renewal. Each day follows a traditional learning model offered to us by our mentors from the Iroquois confederacy.

Central to our philosophy, symbolized by the 13 plates of the turtle’s shell, is the idea that no one cultural group “has it all,” that everyone was given a piece of the whole and that we must bring the pieces back together to complete the picture of who we are as people. This is reflected in the cultural composition of our global network, which now includes: Mohawks, Senecas, Miccosukees, Diné, Puyallups, Aztecs and other Native Americans; Anglos, Chicanos, Hawaiians, Filipinos, Swedes, Chinese, Japanese, Brazilians (Native— Yawanawa and Kura-Bakairi—and non-Native); and Aboriginal Australians from three southern language groups—the Kaurna, Narranga and Ngarrindjeri.

Here are some brief highlights of the journeys we chose in the past year to further this important work:

Our scheduled visit last March to join Projeto Pegadas Brasil for their ongoing work with the community in San José, Maranhão, was canceled. But in September we received an invitation from two graduates of Nutrindo as Raízes—Isabel Taukane and Andreia Naique Taukane—to join them in October for Circulo dos Saberes (Circle of Wisdomkeepers), a dream they had to benefit the youth, ages 12–20, of their tribe, the Kura-Bakairi, who live in Mato Grosso, in the region of Cuiabá. 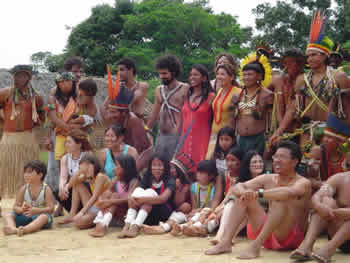 The women began to develop this dream to help recover their peoples’ traditional knowledge and respect for nature after completing the mentor program in 2005. With the help of Luciana Pinheiro, Odil Apakano (cacique of the village Painkum), and others, the first gathering took place in October. The name of the village where the encounter took place is Painkum, which in the language of the Bakairi means “Blue Water.” The youth were presented with the opportunity to learn firemaking, the production of traditional musical instruments, the bow and arrow, medicinal plants and many more traditional sciences, together with theater, history, poetry and music.

Circulo dos Saberes was a great success and attracted the attention of a governmental organization dedicated to indigenous health. The Bakairi team was invited to take part in the First Symposium on Indigenous Health held in Brasília in November, and they have already made plans for their second gathering, to be held next year in the village of the Paresi people. Though we were unable to attend the circle this year, we hope to be with them in 2007. Circulo dos Saberes and Projeto Pegadas Brasil are examples of what can transpire when a seed is planted in fertile soil and the ground is watered with caring and love. Our deepest thanks to all our circle in Brazil!

Hawai‘i – “Where does the rainbow end?”

In Hawai‘i, we entered a profound new phase of the mentoring process which allowed us to bring many new pieces of our network together. In February we joined Brother Noland to provide music and “Lessons of Aloha” for Senator Les Ihara’s bachelor party on Waikiki. That evening we met many new people, including Senator Ihara, Mike McCartney (then President of PBS Hawai‘i) and Judge Michael Broderick of the Family Court. The small crowd enjoyed hearing our music and stories, and Mike McCartney later told us that he used our Turtle Story and the message of “Bringing the Pieces Together Again” when he introduced the Hawaiian premier of Al Gore’s film, An Inconvenient Truth.

Together with Brother Noland, this new group of friends was instrumental in organizing a series of special events in June. The Center for Alternative Dispute Resolution and its director, Elizabeth Kent, sponsored a special presentation for the Hawaiian Supreme Court on Restorative Justice and Peacemaking which was attended by Chief Justice Moon, Justice Duffy and more than 60 other people. Judge Broderick addressed the need to continually search for new models of peacemaking, and Brother Noland shared some of his experiences growing up in the Hawaiian housing projects. Pastor Eddie Riveira spoke of his many years spent in prison, the maze of crime and punishment and his current work with Victory ‘Ohana, a program which teaches ex-convicts humility and respect.

Brother Noland and John Stokes look out from Halona Point toward Moloka’i. Photo by Jade Stokes.

John Stokes shared stories of his work with traditional communities in Australia and North America, with special emphasis on the Iroquois confederacy, the Great Peacemaker, and the teachings of the Great Law. At the conclusion of their talks, Noland, Eddie and John each shared a song on guitar. And at the conclusion of the forum, Stokes shared a thought learned from Mohawk spiritual leader Tom Porter:

“We don’t need to build communities—communities build themselves. All we need to do is block the things that block community.”

In the days following the forum, we were able to meet several times with Noland and these new contacts, including meetings at the State Capitol and a presentation at Robbie Alm’s house in Nu‘uanu attended by a diverse group of thinkers and educators.

We were also able to get together with the graduates of the Alaka‘i Project at Ho‘omaluhia in June to share some new pieces of curriculum and discuss their participation in the NTR Cottonwood program in 2007. And once again, we joined Noland for a short mentoring session with young Pacific leaders from Guam, Hawai‘i and the US Mainland who were taking part in the Napali Project sponsored by the Pacific American Foundation (PAF).

To connect our work in Hawai‘i and Tahiti energetically, we also visited certain wahi pana (sacred sites) on O‘ahu that are connected to Tahiti through the voyages and adventures of ka poe kahiko, the ancient people.

In our visit to Huahine last February, we discovered the significance of the number Four. This trip was our fourth visit to the island and to many of the new people we have met there, this fourth visit signaled the sincerity of our intent. While staying at the small family-owned pension we have chosen as our favorite place, we had the good fortune to meet Armando, a new friend, who was offering several cultural presentations on Tahitian plants and their uses.

Our conversations on cultural awareness led to a meeting with a whole array of new people on the island, including the crew of the well-known fishing boat, Fare Ara. We were invited to go out deep sea fishing with Fare Ara in the waters between Huahine and Raiatea for mahimahi, bonito and haura (swordfish). During the week we had several opportunities to get together with our new friends for parties and barbeques. 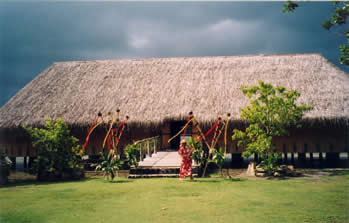 Huahine is home to more than 200 sacred sites, including the remarkable constellation of marae at Maeva. Over the years, friends have put us in touch with Dorothy Levy, who is the acting Director of the cultural center Fare Pote’e, located at Maeva. Dorothy, who was a long-time friend and collaborater with the late artist Bobby Holcomb, has plans for a cultural exchange program between Huahine and Hawai‘i which will involve The Tracking Project and Fare Pote’e. Hawaiian children will travel to Huahine to be paired with local children for a week of cultural programs. Then the Tahitian youth will travel to Hawai‘i for a reciprocal learning process. We have chosen February 2007 for our planning meeting and February 2008 as the date for the project. We hope to involve Brother Noland, our Hawaiian mentor circle, and all our friends on Huahine in this exciting new program.

Our work within “the Triangle” will continue, thanks to the vision and support of the Aurora Foundation. In February 2007 we will travel to Hawai‘i and Tahiti once again to complete the travels we set out in our grant request. And in the Fall of 2007, we hope to join the staff of Projeto Pegadas and members of our Brazilian mentor circle for Circulo dos Saberes and other new initiatives. Join us in bringing the pieces together again, creating a circle of caring people to join hands around the world in the protection of land and life.