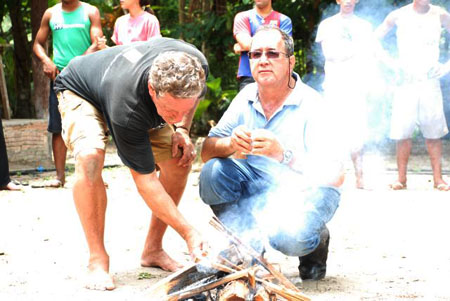 In October we followed the tracks of the onça pintada (painted jaguar) once again to the center of the Amazon region, to Manaus and Rio Preto da Eva, to extend the support of our mentor outreach program to the young rastreadores Brasileiros who took part in the course we offered there in May 2007. It was obvious from our Arts of Life programs that the interest for deeper studies was high and that the pool of talent among the young people was notable.

For the October camp, the core group from 2007 had nearly doubled and we were 51 people camping for three days on the shores of a tributary of the Rio Preto. To teach the course, John Stokes was joined by Luara Presotti from Brasília who helped with translation. Luara took part in her first Pegadas course when she was 14 and has been a member of our tracking circle since that time. She, her mother Martha and sister Clarissa are also graduates of Nutrindo as Raízes, our Brazilian mentor program.

This trip was funded by the Aurora Foundation. Our local host and coordinator in Manaus was Caroline B.E. de Carvalho, a long-time associate and member of our original New Mexican mentor program in 1998. Caroline was assisted throughout the process by members of the 2007 camp and her husband Saul, who provided us with transportation and hospitality. 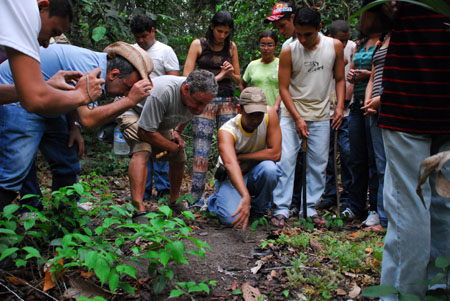 The idea of a mentor outreach program came from a series of discussions with the Aurora Foundation in 2003 to devise a strategy for an initiative which would strengthen our existing global mentor network and and expand the work of The Tracking Project into new areas. We chose the vast, culturally diverse “triangle” formed by the Hawaiian Islands, the islands of French Polynesia and the heart of Brazil as the focus of our work. Through a series of journeys into these regions over the last six years, we have been able to grow exponentially—identifying new mentors, meeting new community artists/educators for future programs and locating new circles of interested people.

Shortly after arriving at Caroline’s house after a day and a half of travel from New Mexico, we were visited by Moacir Biondo, a noted herbalist, professor of medicinal plant science at the University of Manaus and President of the Instituto de Permacultura da Amazonia. His son, Henrique, had been a part of the 2007 group. Moacir wondered if he might bring the crew from his television show Ervas e Plantas Medicinais to the course to film in order to share our Arts of Life model with the people of Amazonas. Together we worked out a series of situations which would allow him to teach his plant knowledge as we tracked the rainforest trails.

Caroline arranged a boat trip to experience the Encontro das Aguas (meeting of the waters), where the yellow water of the Rio Salimões meets the darker waters of the Rio Preto in a marvelous wave pattern for some miles before they merge into the waters of the lower Amazon. Later that day we presented a short usical program to the students of the International School of Amazonas.

On the day we arrived in Brazil, the Amazon was in a deep drought and the river was dropping 20 cm per day! But on Thursday there was discernable moisture in the air, and by Friday noticeable clouds. As we lay in our hammocks early Saturday morning, the deafening noise of a tropical downpour on a tin roof awakened us with a start. My friend Florencio told me with a smile that the rain had dropped the temperature almost 10 degrees, enough to keep the snakes in their holes, as the area we were camped in had plenty of snakes. 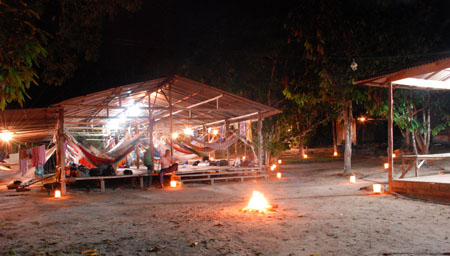 Moacir used the opportunity of our silent walk and stalking training to teach the group many different medicines. “You have to realize that just being in the rainforest is already a medicine. It’s a way to relieve your stress and tension.” He taught us the uses of many common plants, including members of the hibiscus family growing near the camp’s structures, all manner of uses for the banana tree, multiple uses of the palm tree, and numerous first aid plants for poisonous snake bites.

He later told me that he will often conduct courses for a community in the rainforest, name a plant and then pass a tape recorder around the group, asking each person to describe a medicinal use of that plant. He then transcribes the tape and presents it to the community, so that they can have a record of their communal knowledge. In this way he encourages the preservation of the plant knowledge as well as the desire of the community to preserve the forest.

Also assisting during the course was Florencio Filho de Carvalho, biologist and musician, who had taken part in the first Projeto Pegadas course in 1998 and who has maintained contact since that time. Florencio’s knowledge of rainforest plants, insects, tracks and bird songs is impressive, and his father, Florencio Siqueira de Carvalho, has written a wonderful book about his 17 years as a rubber tapper in the Amazon—At the Heart of the Rainforest: Life Experiences of a Caboclo from the Amazon (translated into English by Caroline B.E. de Carvalho).

By the time the film crew left with Moacir on Sunday, they had gathered enough tape for two television shows. (Our friends in Brazil say the shows have already been shown twice on television, but we haven’t seen the tapes yet.) We completed the course on Sunday with a Tree of Peace ceremony, planting an avocado tree to celebrate the message of the Great Peacemaker.

Our last day in Manaus was spent with some of our mentor prospects, discussing strategies for future projects and ways to assimilate the teachings of Projeto Pegadas into the work these young people are already engaged in. We have plans for more visits to Brazil in 2010 and many ideas of how to continue utilizing the energy and talents of our vast network of interested young people there.

Our work in Brazil continues to shine brightly, thanks to the Aurora Foundation, the people of Projeto Pegadas, our mentor circle and the many individuals who assist us in this valuable project. Temos saudades for our many Brazilian hosts and friends for their dedication and hospitality.