Last January we returned to the cerrado region of central Brazil, following the tracks of the onça (jaguar) as they led us to the third and final year of Nutrindo as Raízes, our Brazilian mentor program. Together with Brazilian educators, artists, youth organizers and community workers, we spent a week at Barra do Dia, a small farm and meeting place several hours north of Brasília, for a week of teachings, discussions, performances and ceremonies. At the end of the week we presented certificates to 32 successful graduates, establishing the first tier of our mentor network in Brazil.

Our participants brought their diverse views from many different regions of Brazil—São Paulo, Brasília, Cuiabá, Alto Floresta. They included psychologists, biologists, architects, students, public servants, history professors, artists, photographers and musicians. One student, a psychologist, has traveled each year from Barcelona to take part in the program. 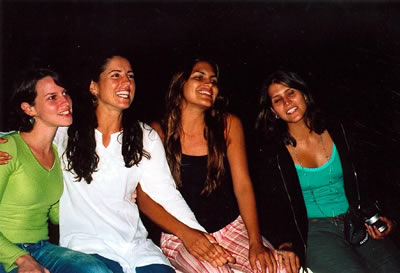 Clara, Grazi, Mariana and Andreia perform for the group, Nutrindo as Raizes, Brazil

The team from North America included: Able West, long-time associate of our project; Solar Law and his wife Renata Cassis Law, our translators for the course; and John Stokes, Director of the project. Jeffrey Bronfman and his son David also attended. Funding was provided by the Aurora Foundation in Santa Fe.

Our days followed a regular rhythm: the Thanksgiving Address, delivered by a different person each day, a workout, dream circle, discussions, afternoon workshops, martial arts training, and each evening, performances and presentations by the participants. Daily discussions followed the key areas of our curriculum:

Thanksgiving, Traditional Tracking & Survival Skills,Nature Awareness, Peacemaking, Cultural Awareness, The Arts of Life, Personal Development , CommunityEducation, Ceremony and Renewal . Within each area, we examine the resource materials available in the training manual, our designated mentors present their thoughts on the topic, and then we open the floor for discussion and comments.

Coming only two weeks after the deadly Asian tsunamis on Christmas night, many discussions focused on the disaster, what natural signs had preceded the tsunamis and the remarkable stories of how the elephants, animals in the zoos of Sri Lanka and some native people had perceived the danger early and moved safely to higher ground.

The ability of aboriginal peoples to observe Nature and use the senses of the animals to extend their own awareness is a cornerstone of the program’s philosophy.

Another topic which resonated with our predominantly youthful mentor group was the reality of the huge number of young people in Brazil today and how to address their concerns. Clovis Henrique, presenting on his youth leadership work with Grupo Interagir, offered the statistic that “Brazil now has 32,000,000 people between the ages of 15 and 24.”

As so many of our participants are already engaged as trainers, teachers and mentors, we also devoted many hours to the topic of creativity—how to track it in a young person; how to preserve self esteem, both personal and cultural, by acknowledging the divergent nature of creativity; and how these practices could be applied to preserving the diversity of Brazilian language, culture and music.

Our Work in Brazil—1998 to the Present

Our work in Brazil—from the creation of Projeto Pegadas, through seven years of annual trainings & leadership camps for Brazilian youth, additional trainings in the United States and now, the final year of Nutrindo as Raízes —has followed a strategic plan developed through the collective vision of the Aurora Foundation, The Tracking Project and the members of Pegadas . The story of how this all came to be is worth relating.

Projeto Pegadas Brasil emerged as a flower of our original mentor program Nurturing the Roots (NTR ), which took place in the Jemez Mountains of New Mexico in June of 1996, ’97 and ’98. Bento Viana, a young visual artist from Brasília, was one of 45 people who attended the first year of the training. 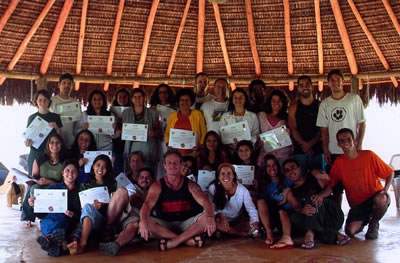 Our happy graduates gather in the oca, Nutrindo as Raízes, Brazil.

Sharing our vision of training young people to care for the earth, Bento sought and received permission in 1997 to establish the work of The Tracking Project in Brazil. He agreed to follow our project’s methodology, goals and objectives in a Brazilian setting. Together with Solar Law in Santa Fe and a team including Edison Luís Guedes Neves, Renata Guedes Neves and others, Bento set up an office in Brasília and began to work with young people.

In October 1998 we were invited to Brasília to hold our first courses in South America. That year, we held a single tracking class for 50 people in the Chapada dos Veiadeiros north of Brasília, near the Macaco river. The camp was a tremendous success. The next year we established a second group of rastreadores (trackers) on the northeast coast of Ceará near Fortaleza and held a second course in Brasília. Then in 2000 we returned to Fortaleza and Brasília for a third round of courses.

In 2001, a new region was added to our network with a course in the Serra de Cantareira, outside of São Paulo.

That same year, we “streamed” our teachings by bringing in a new intake of beginning students in Brasília, while creating a new set of leadership classes for our advanced students there. By the fourth year of the project, our main problem was how to hold enough courses and how to visit all the different centers we had established each time we visited the country.

In 2002, we met this challenge by visiting Brazil twice in the same year, thanks to the Aurora Foundation . In May we held a tracking course on a farm in the Pantanal region southwest of Cuiabá and a longer leadership camp for the advanced students in Brasília. Returning in October we visited São Paulo for a second year and took our second group of trainees in Brasília into their second year.

Throughout this time, Bento, Edison Luís and the staff of PPB maintained a rigorous annual schedule of camps and school visits, bringing their work to the attention of thousands of young people. They set up a website, made a short movie about our work, documented their outings in photo and video and spread the word of natural awareness.

Their work created second, third and fourth generation models of our programs in some of the most remote and impoverished communities in Brazil.

After six years of training and networking, it was obvious that the camps had attracted some very bright young people. It was now time to bring them together in a coherent group. Invitations were sent out and in January 2003 we held the first year of Nutrindo as Raízes , the Brazilian version of Nurturing the Roots.

Held on a remote farm on the border where the states of Goiás, Minas Gerais and Bahia come together, the first program drew participants from Rio de Janeiro, São Paulo, Curitibá, Cuiabá, Brasília and the Amazon, including artists, educators, architects, community organizers and Indigenous leaders.

In October 2003 we returned to hold courses near Cuiabá and Brasília, and in January 2004 we held the second year of Nutrindo as Raízes . With the conclusion of the mentor training last January, we are now looking to undertake further projects through our network in Brazil. Last January we returned to the cerrado region of central Brazil, following the tracks of the onça (jaguar) as they led us to the third and final year of Nutrindo as Raízes , our Brazilian mentor program. Together with Brazilian educators, artists, youth organizers and community workers, we spent a week at Barra do Dia, a small farm and meeting place several hours north of Brasília, for a week of teachings, discussions, performances and ceremonies.

Major funding for the start-up of Projeto Pegadas Brasil and for our visits since 1998 has been provided through the generosity and vision of the Aurora Foundation in Santa Fe. In Brazil, further assistance has been provided by O Fundaçao Boticário, the AVINA Foundation, Nature Conservancy do Brasiland other organizations.

We need assistance for our work in Brazil to continue. We still think that there is no better work than training these young people to care for the beautiful gift that is Brazil. We extend our special thanks to the Aurora Foundation, our mentors, staff and participants—obrigado . With saudades for our many Brazilian hosts and friends, we look forward to more remarkable experiences with the people and the natural world in Brazil.