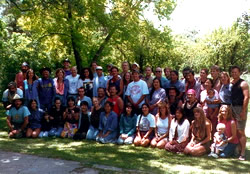 Participants from around the world in year two of Nurturing the Roots, the Tracking Project’s community mentor project

In the summer of 1998, we completed the initial three-year training phase of our mentor program, Nurturing the Roots. In our minds, the completion of the training was the culmination of a decade of “staff development” and the beginning of the work we could all do together as a global team. But we were unprepared for the quality and amount of inspiration from the participants. Not only did several brother/sister projects spring up in North America, Japan and Brazil, but when our people went back to their communities and shared our curriculum, we were invited to expand our network through “second generation” mentor trainings in other countries.

So, this June we once again invited our team of 50 grassroots educators, artists and community activists from around the world to gather at the Circle A Ranch Hostel near Cuba, New Mexico to present two new areas of curriculum—Renewal and Ceremony—and to strengthen our circle by pooling our knowledge, experience and successful community education strategies.

Short History of the Project

Original inspiration for this project came from the late Parley Kanaka’ole of Hana, Maui, who in 1991 saw that our project should host three international gatherings to train a circle of caring people who would “join hands in the name of the future generations.” In 1993, The Tracking Project began to plan and seek funding for a formalized mentor program which would allow us to expand our work of “training trainers” to help people equate environmental literacy with their everyday life. Seed money was made available by the Aurora Fund of the Tides Foundation in 1995 and the first session was held in June 1996.

The name Nurturing the Roots was chosen to convey the idea that the roots of any community are its elders, culture, language, history and the ability to transmit this information to its youth. By energizing these roots, we hoped to stimulate the growth of ever more beautiful “flowers,” helping the communities regenerate themselves while giving the roots a well-deserved “second wind.”

Central to our philosophy, symbolized by the 13 plates of the turtle’s shell, is the idea that no one cultural group “has it all,” that everyone was given a piece of the whole and that we must bring the pieces back together to complete the picture of who we are as people. This is reflected in the cultural composition of our group, which includes: Mohawks, Senecas, Miccosukees, Diné, Puyallups, Aztecs and other Native Americans; Anglos, Chicanos, Hawaiians, Filipinos, Swedes, Chinese, Japanese, Brazilians; and Aboriginal Australians from three southern language groups—the Kaurna, Narranga and Ngarrindjeri.

Participants were asked to commit one week a year for three years to the project. We felt that this would allow the lessons of tracking and nature awareness to be assimilated more fully by each prospective teacher. Each year our daily presentations, discussions and hands—on workshops followed what we felt to be the essential components of our curriculum, which we laid out on the plates of a turtle’s back: Thanksgiving, Traditional Tracking & Survival Skills, Nature Awareness, Peacemaking, Cultural Awareness, The Arts of Life, Personal Development, and Community Education.

In 1998, at the suggestion of Gus Miclat from the Philippine NGO Initiatives for International Dialogue, we added the plate International Community to encourage networking on a global scale. As Gus puts it, “we need to act locally and globally at the same time.” And in 2000, we added plates for Renewal (seeking renewal and sustainability in all areas of the curriculum) and Ceremony, to make 11 areas of study. It was suggested by PAZ, our Aztec mentor, and agreed by all that we should always leave one plate on the turtle’s back blank, to symbolize “silent knowledge, all that we don’t know” and to remind us that we cannot know everything.

None of this work would have been possible without the vision and generosity of our funders. We remain forever grateful to the following people and groups who made a commitment in 1995 and whose assistance in each of the four years made this program a reality: The Aurora Fund of the Tides Foundation, the Tides Foundation, Grant Abert & Nancy Ward, and the Frances V.R. Seebe Charitable Trust. Thank you.

The reunion offered numerous highlights, but special mention this year must go to our outstanding mentors, who demonstrated their depth and respect as they guided us ever deeper into the teachings: Jake Tekaronianekon Swamp (director of the Tree of Peace Society and leader from the Mohawk Nation), Kevin (Dookie) O’Loughlin (Narrangga cultural educator), Dave Martine (Diné peacemaker); PAZ & Rita Zamora (Ehecatl Aztec dance group).

Each day began with the Thanksgiving Address, our workout, and workshops following the various plates of the curriculum. Jake conducted his Tree of Peace ceremony (which includes the presentation of the Journey of the Peacemaker) and gave us deeper insights into the origins of the Thanksgiving words. Dookie shared a wealth of information regarding techniques for educating Native and non—Native peoples about Aboriginal culture. In addition to their fine dance performance and presentations on cultural awareness, PAZ and Rita also engaged us in a strong midday ceremony to the sun on the summer solstice. The staff of The Tracking Project provided support and teachings on tracking, awareness and survival skills.

In their invitation letter, each participant was asked to bring some water from their area to be used in a ceremony of cleansing, balance and renewal. Water, the magical substance that distinguishes our planet from others—the essence of life—like our spirit needs to be cleansed and revitalized. So the water arrived—from Zuñi, Cerro Gordo, Cuba and Taos, New Mexico; Wendell, Massachusetts; Cherry Valley, New York; Petaluma, California; Brasília and Amazonia, Brazil; Arlanda and Ingarö, Sweden; Davao City, the Philippines; and the River Murray, South Australia.

This water and the balance of fire and water took on added significance for us following the destructive fires in nearby Los Alamos just weeks before the gathering. Dave Martine and John Stokes collaborated in the ceremony, collecting the water in a large bowl and blessing it, after which Dave used the water to bless the altar, offering water to the land, to our youngest man, youngest woman and our elders. Standing in a half circle, open to the east, each member of the gathering also drank some of the water. And then the water was placed back into the containers that it had arrived in, to be taken back and used to cleanse its source.

Like the water, we had come from around the world to join together and be revitalized. By all accounts, Nurturing the Roots has been a tremendous success. In addition to the bonds formed with our people here in North America, our work on the international scene has mushroomed: our participants from Japan report that they have started an art festival based on the teachings of the Thanksgiving Address; our Swedish participants from Natur Akademin have plans to host several gatherings with The Tracking Project in Sweden in 2001; the first mentor training in the Philippines with IID took place in March 2000 with a second training planned in 2002; and our work in Brazil through Projeto Pegadas Brasil, now in its third year, is meeting with incredible receptivity with further gatherings and a mentor training there planned for 2001. We look forward to this work and to enlarging our circle of friends.

We extend our greetings and thanks to each of our mentors, participants and funders for helping to make this dream real. We look forward to the positive things this circle of people can achieve together.